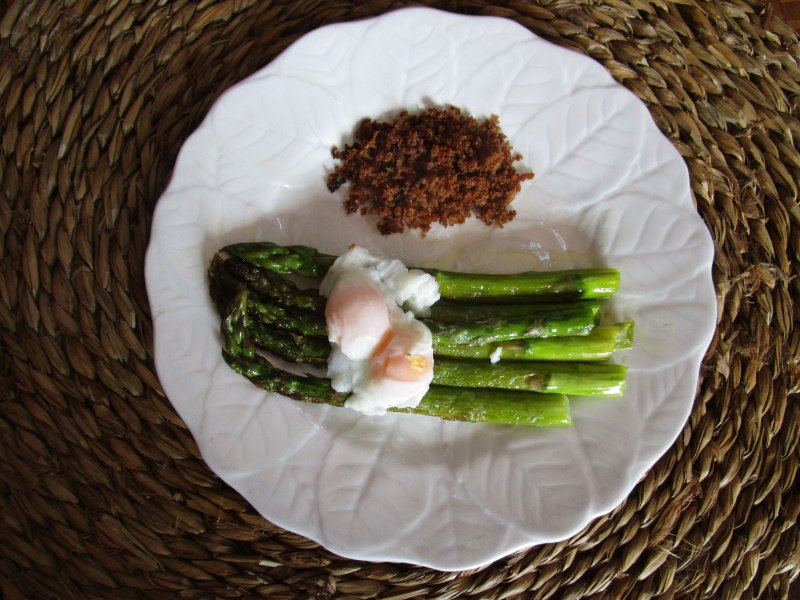 Paintings by 18th-century artists might show fat white asparagus spears in a cornucopia of produce, but as economist Ignacio Jordán de Asso explained in his 1798 description of Aragonese market-gardens, “one notices the absence of cultivated asparagus, of which we have none, although our soil is well adapted to growing.” Altamiras’s spears were, then, wild sprue, still foraged today in open countryside. Why did market-gardeners avoid growing asparagus when it was a fashionable food with social status? As tenant farmers, they explained to Jordán de Asso, high rents meant they could not afford the three or four year wait for the first crop. Farming economics, then, held sway in popular kitchens, not fashions for a few with large private kitchen-gardens. Altamiras dressed his spring sprue with “fresh olive oil, cloves, cinnamon and a little saffron”, a winning mixture and equally good with cultivated green asparagus, which has been popular in Spain since the early 20th century. Fry the trimmed stalks to keep their verdant green colour, toss them with the roughly pounded spices while still crunchy, and marinade them in your frying oil for a few days in a cool place: the spices add a surprising but satisfying sweet perfume. Altamiras also suggested adding an egg or two, perhaps thinking of their nutritional value since he left all options open regarding cooking method. He may have shirred them as a soft revuelto, but Catalan friary cook Sever de Olot, author of a private 1780s manuscript, preferred “hard-boiled eggs and chopped hazelnuts on top”. Poached eggs are good, too, added to each plateful just before serving so your yolks sauce the warm stalks. I also like to add a heap of fried barley breadcrumbs, a reminder of old-fashioned breakfasts and the soils of wheat fields where Altamiras’s wild asparagus grew.