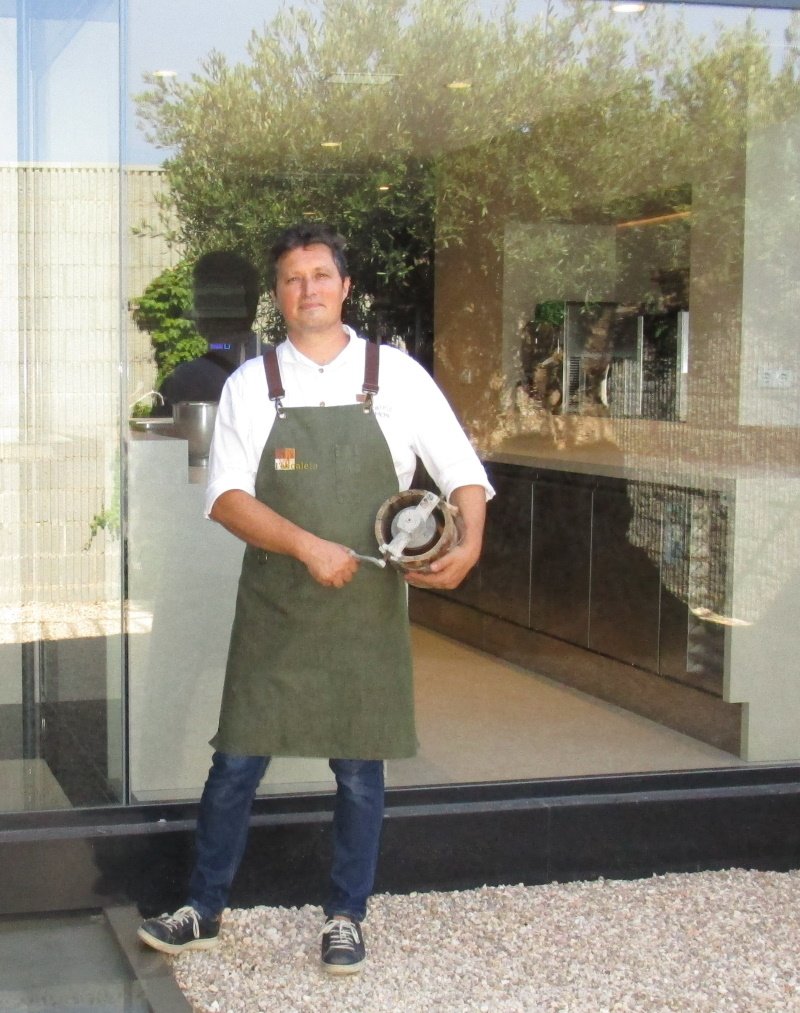 Historic cookery may be a pick-and-choose exploration of the past, ranging far and wide in time and place, or it may explore food memory and culinary identity in a particular setting in a personally expressive way. At L’Escaleta, a family restaurant perched on a sierra hillside above Cocentaina in inland Alicante, Kiko Moya’s cookery is intensely personal, but it is also immersive: dishes jump surrounding landscapes into close-up detail, sometimes lyrically, as in visually rich dishes of almond or fig, but also unashamedly plainly, as in renowned rices, their grains cooked thinly spread to create a range of browned textures from dry (seco) to sticky (meloso), to crispy, all within a forkful of each other. In the restaurant’s first book, El Sabor de la montaña mágica (Abalon Books), published last year to tell the story of the restaurant’s first forty years of life, Kiko explains his take on the past, speculating on the 18th century’s pleasure in the exoticism of iced desserts we take for granted today, noting how the countryside’s leaner decades, often forgotten, are still well within living memory for older people, and paying constant homage to the little-known produce of this inland pocket of the Mediterranean. The restaurant also remains true to its family roots: conversations between friends fill the dining room, and its gardened porch seems to offer the welcome of a home as much as a business. As a declaration of intent, L’Escaleta has also this year rebuilt its kitchen, which looks onto a starkly modern but timeless patio. As if to reflect culinary practise for the future, gazing into the kitchen’s 21st-century glass walls from the patio one is again immersed in the landscape, glimpsing the kitchen only through a veiling lifesized mirror-image of the patio’s olive tree, its gnarled trunk a telling symbol of the local food culture, hard won during millennia of work.