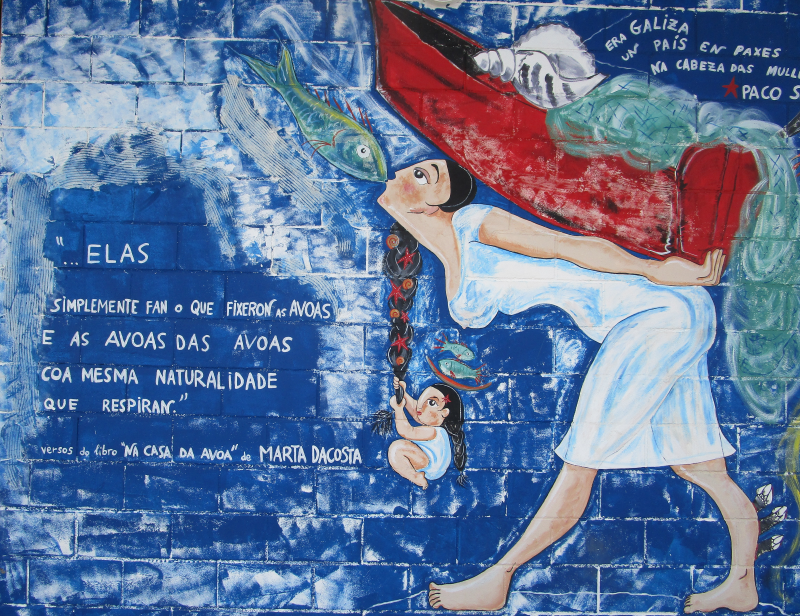 When I first came to live in Madrid I spent Christmas or New Year’s Eve with friends in Galicia, so when I was commissioned to write about the Spanish festive season, I wanted to capture the power of gallego feasting tastes. Living immersed in Spanish life I was able to write this piece with a rare sense of freedom, which in turn became a starting point for the historic narrative in New Art of Cookery, or Nuevo arte de la cocina española.
……….
“No one who enjoys eating can think of Galicia without first thinking of the pleasures of its cuisine,” wrote Gabriel García Marquez, whose gallega grandmother’s bread, cured hams and solitary conversations with ghosts imprinted on his mind a region he had never seen or known.

Marquez, born and raised in Columbia, is not alone in having been shadowed by the rain-soaked Celtic land of his forebears. Galician dishes (and ghosts) are among the best-travelled in the world, taken to Latin America and around Europe by the one in three gallego men and their families who since the 17th century have emigrated from their homeland in search of work. On Noiteboa, or Christmas Eve, when the first of half a dozen big festive meals is eaten in Galicia, many families say a prayer for those who accompany the family in spirit: los defuntinos and emigrados, or the dead and the emigrés.

And what would the emigrés, first or even third generation, talk of on feastdays, far away in their new homelands? “For me…,” wrote Marquez – third-generation – “homesickness for Galicia had started with the food even before I had been there.” His nostalgia was for the taste of ham, lacón, eaten with turnip greens; but it could equally have been for chorizo sausage and morcilla, black pudding, laboriously made and hung from the rafters after the December pig-killing; filloas, thin pancakes eaten with sugar; or aguardiente, eau-de-vie warmed with lemon and sugar to make queimada, ladled from the flambé bowl into small clay drinking cups.

All these appear at Christmas in Galicia today, but for older people from the countryside more evocative feasting memories might be meatless, like salt-cod with cauliflower, an inland dish, or roasted sea-bream, eaten closer to the coastline.

For both young and old alike (since the custom hasn’t died out) roast or stewed capon, eaten on Christmas Day in the old days, would be perhaps the most distinctively Galician dish. Raised on family farms, fed with maize, potato and in the old days with chestnuts, balls of rye flour paste or bread bound with milk and wine, the capons used to be kept in capoeiras, wooden cages built under stone benches around kitchen walls, close to the warmth of the fire. You still see these curious cages in the old farmhouses and pazos, manor-houses, but nowadays the capons don’t cohabit with those who later eat them. They’re fattened in farmyards for six or seven months and sold at markets where their rounded breasts show proper rearing.

The most famous and expensive capons, costing up to €120.00 a pair, come from Villalba, a town in the misty Terra Chá or tierra llana – flatlands – where buyers converge from far and wide on an annual poultry fair and snap up a thousand or so birds, which invariably sell out before allcomers are satisfied. Emilia Pardo Bazán, the 19th-century Galician novelist, described Villalba capon as “exquisite, less fine than French poulardes but maybe more substantial. It has a fumet or special whiff and should not be eaten until this has developed, nor left until it becomes very marked….” In 2017 the capons were finally registered as a speciality – Indicación Xeográfica Protegída – defined by breed, rearing method and fattening food.

In Pardo Bazan´s novel, The House of Ulloa, one of the priest’s housekeepers was famed “for her skill at churning butter and roasting capons”, and in one of her two cookbooks she explained how to roast capon on a brasero till it blistered. Splashing the skin with brine and basting it with its own fat, the colour and smell would announce when it was done. Other cooks pot-roasted capons, turning them carefully to cook them through evenly.

Another of Bazan’s recipes was for a “fresh capon, dead three days, not big, but plump”. On my Christmas visit I was given a similar dish after being nosy about a dish of kitchen leftovers. Pura, the cook who had stuffed and roasted the bird, had rubbed it inside and out with parsley, garlic and salt two days before roasting. The cavity – in Galicia sometimes called el barco, or boat – was then filled with fat pork, apple chunks, cooked peeled chestnuts, onions, and a few Malaga raisins and pine kernels, and the bird was basted with white wine as it roasted.

Emilia Pardo Bazan’s recipe differs in two details. One surely came from the real life cook on whom her ficitonal priest’s housekeeper was modelled: three hefty dollops of home-churned Galician butter – one in the stuffing, a second to baste it while roasting and a third to brown oa breadcrumb crust. The other addition was a tart apple compote to accompany the capon.

Both dishes are essentially town recipes. In rural areas the capon would more often be simmered in stock, or guisado, and braised with onions in the bird’s own fat and a little white wine. This is pure Galician or enxebre capon, which would have come to many emigrés’ minds.

And this is also the stuff – along with the wet wintry landscape and the nightime walks to la missa del gallo or midnight mass – of which gallego emigrants’ memories and homesickness would be made. García Marquez was able to return to his grandmother’s homeland to write of his impressions, but many emigrés of his generation who met to feast, sometimes in tropical warmth, knew they would never be able to make the long journey to feel Galicia’s cold mistiness, to savour enxebre tastes and to talk till the early hours of Christmas Day enjoying the fireside warmth.

For them kitchen aromas and talk of cookery might replace family gatherings, even dishes, and then the food of the emigrés’ forebears would become a bond across time and space, a thread attaching successive generations to a homeland they had never seen.