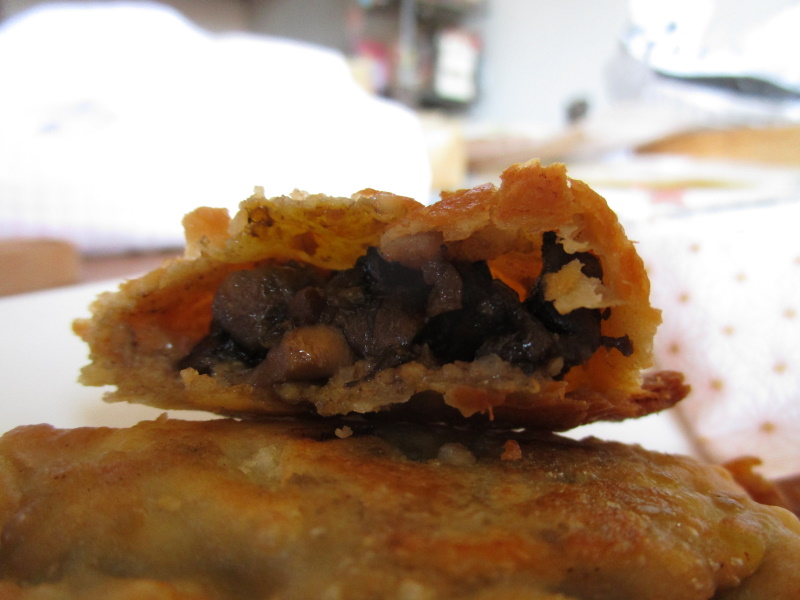 Among Altamiras’s meatless recipes I’ve cooked for friends, his empanadillas, or pasties, are perhaps the most popular: they look so familiar, but reveal surprising fillings, flavours, aromas. Those stuffed with wild thistle mushrooms (Pleurotus Eryngii) and a hazelnut sauce were an Altamiras original, probably improvised in his search for flavour on meatless days. Back in the 15th century De Nola had sugared almond-filled empanadillas and Montiño, palace cook for the Hapsburgs, had suggested expensive fillings – perhaps leftovers – of pig’s trotters, pork crackling, or even truffles. These were all way beyond Altamiras’s budget, but the dough and thistle mushrooms, now a scarce gourmet funghi, which is foraged on hillsides and in fields where wild thistles grew, were affordable. Recreating them today you can use expensive gourmet wild mushrooms, but I prefer to stick to the spirit of Altamiras’s economic ingenuity, cooking fresh field mushrooms and bumping up the flavour with a stock made with their own stems and skins. Spain’s ready-made pastry obleas are handy, or you can make one of Altamiras’s own lard-free frying doughs, crumbly and hard to handle, but gorgeously tender. Among all his dishes this is also one of the best to match with wines, as the sweet fungal flavours pick up on the subtleties of red Garnachas and Grenaches, Spanish whites like Txacoli, Albariño and Rueda, and any of the oxidised Jerez family.