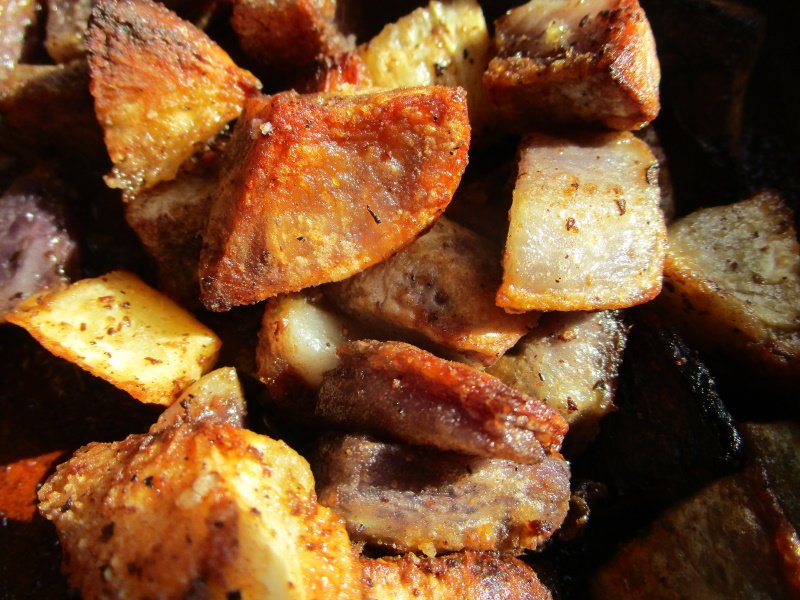 Altamiras had excellent local turnips to hand, nabos de Mainar, “good to eat, and devils to peel”, velvety in texture, mildly flavoured and shaped like large carrots. Towards the end of the twentieth century they disappeared for a few decades, but the growing fields have now reappeared on the plains near Mainar, once a friary town, where the original variety is being replanted with the help of Zaragoza’s seed-bank. Altamiras’s ingenious recipe, though, is good for hard-fleshed roots in general: potatoes, tarots, yams and organic carrots, for example, or a mix of roots added one by one to your pan to allow for individual cooking times. This was a bold recipe for Altamiras to publish. Hapsburg court cook Martinez Montiño had dubbed turnips his enemies and Madrid’s Golden Age theatre-goers had chucked them at the stage when displeased with a performance, but Altamiras gave them a starring role, tossing them in aromatized onion oil and griddled flour to serve on their own. The olive oil lends sweetness to balance turnips’ pungency and the browned flour helps to crisp the roots’ skins, adding a nutty flavour and gritty texture. Both flavourings have disappeared today (although browned flour is still often used in biscuit making), perhaps because they take time to prepare and were superseded by French techniques, but they are well worth rediscovering today. The oil was an Altamiras original, medicinal or Morisco in origin, while the griddled browned flour seems to have come from Portuguese court cookery. Both keep well and can be prepared in batches: you can use the oil for dressing steamed greens like snow peas or spinach while the browned flour gives a dark, lemony sauce known to Portuguese cooks as salsa negra, which Altamiras used to thicken a saffroned chicken casserole.