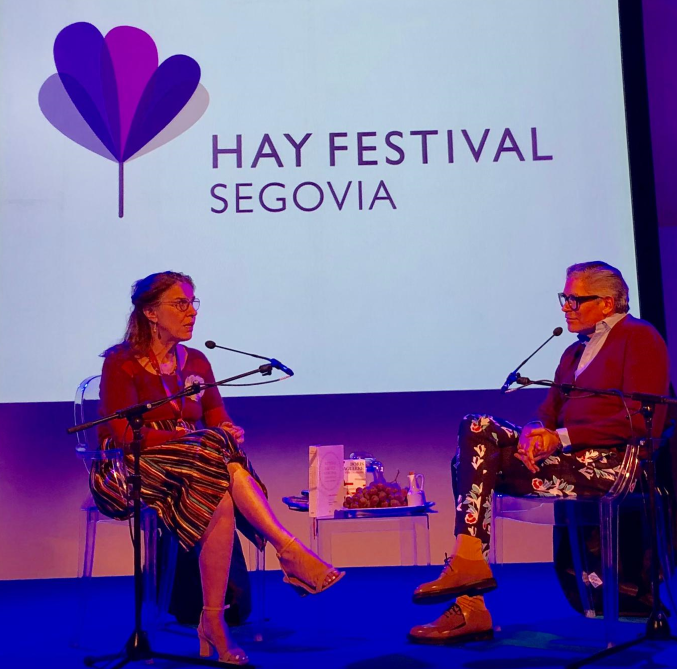 “One day food will be considered part of culture. And it just may be that it’s more important than books, Mr Williams.” So says Rosalind, the protagonist of Boris Izaguirre’s novel Un Jardín al norte (2012) as she converses at a dinner in Lisbon shortly before the Spanish Civil War. Izaguirre’s penchant for gastronomic detail, high and low, and his eye for popular cookery’s unsung good things made him a brilliant (and generous) conversational partner at 2019’s Segovia Hay Festival. Our conversation, which fell within a brilliant spotlight on contemporary writing in Spain organized by Fundación José Manuel Lara, hedgehopped from Juan Altamiras’s personality as a cook to friary culture today; from explanations for New Art’s publication in Madrid to historical cookery’s inspiration for chefs; and from Galenic medicine to meshed Jewish and Morisco influences in Iberian cookery. Aptly our conversation programmed within Fundación Jose Manuel Lara’s spotlight on contemporary writing in Spain, took place in Segovia’s recently restored mudéjar granary, or alhóndiga, a municipal institution bearing witness to continuities between medieval and early modern food culture. Finally we talked of writing as a craft. Boris’s historical fiction, notably Jardin al norte and Villa diamante (2007), a finalist for the Premio Planeta, pivot on his skill in creating relationships and settings – landscapes, homes, gardens, meals, journeys – that provide miniature echo boxes for major historical events, allowing readers to reappraise them. Boris wondered aloud as we spoke: had writing New Art required invention of such a kind? My answer was, no. Narrative history’s beauty is for me the discipline of non-fictional research: accumulating, selecting and dovetailing valid historical evidence until it reveals unexpected realities one would never dare to invent. Who could have guessed, for example, that friars cleaned cooking pots with bran, that Altamiras’s grandfather had been a confectioner, or, indeed, that Altamiras learned his cookery techniques in a fertile patch of Aragon with a very particular Morisco cultural history? One parallel with Boris’s fictional cooks does, however, catch my eye: his female protagonists, Elisa and Rosalind, enjoy freedom of speech in their cooking, composing haute cuisine menus that wink with social irony as a cocina pobre bean soup or Moroccan salad appears in a banquet served to society and diplomatic guests. How far did Altamiras dare to play in this way? We cannot know, but his asides about stewed apple (not for nuns); marzipan-stuffed eggs good for bishops; stewed mutton dishes to satisfy “gallants” and plain pumpkin for those of “primera clase” suggest a sharp and questioning psychological eye at work.