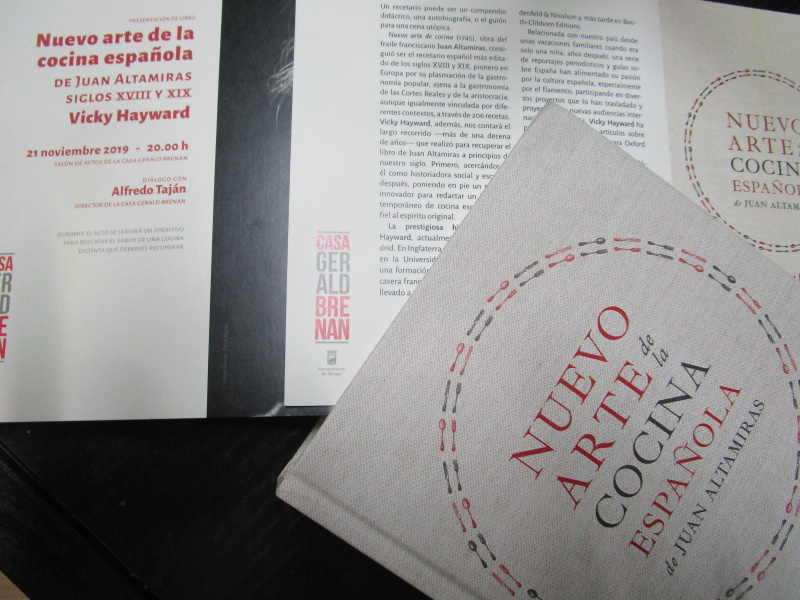 An invitation to talk at Churriana’s Casa Gerald Brenan with director Alfredo Taján brought with it a special excitement, that of opening a door in the world of Hispanist studies. For while Brenan, Raymond Carr, J.H.Elliot, Ronald Fraser, V.S. Pritchett, and Hugh Thomas – to quote just a few distinguished British twentieth-century hispanists – included agriculture, food culture and commerce in their studies of Spain, none took food or cookery as a main focus. Yet their approaches had provided benchmarks: hunger appeared alongside their analyses of gastronomic discourse in courtly culture, while Brenan, as Carlos Pranger comments, brought to his work an independence of mind invaluable to a food historian. As important for me was Brenan’s desire to open hidden pockets of social history for general readers. One can find a line of ethical continuity here. In 1745 in New Art, Altamiras had revindicated an “economic school of cookery” for a new kind of reader, not necessarily wealthy, for whom cookbooks had not yet existed in Spain. In 1949 in The Face of Spain, Brenan was engaged with writing about what he found on a journey to Andalusia for a very broad audience. Likewise I felt New Art of Cookery should not be brought to modern readers as a didactic academic study, but should echo Altamiras’s layered messages, allowing cooks and readers to discover and read the book in their own way, albeit grounded by rigorous research. As a reflection of that open-ended idea we ended our dialogue with edible history: a series of aperitivos recreating Altamiras’s spectrum of flavours and colours, from rye bread to pumpkin, onions to olives and apricots to almonds (see Pumpkin Barcas).