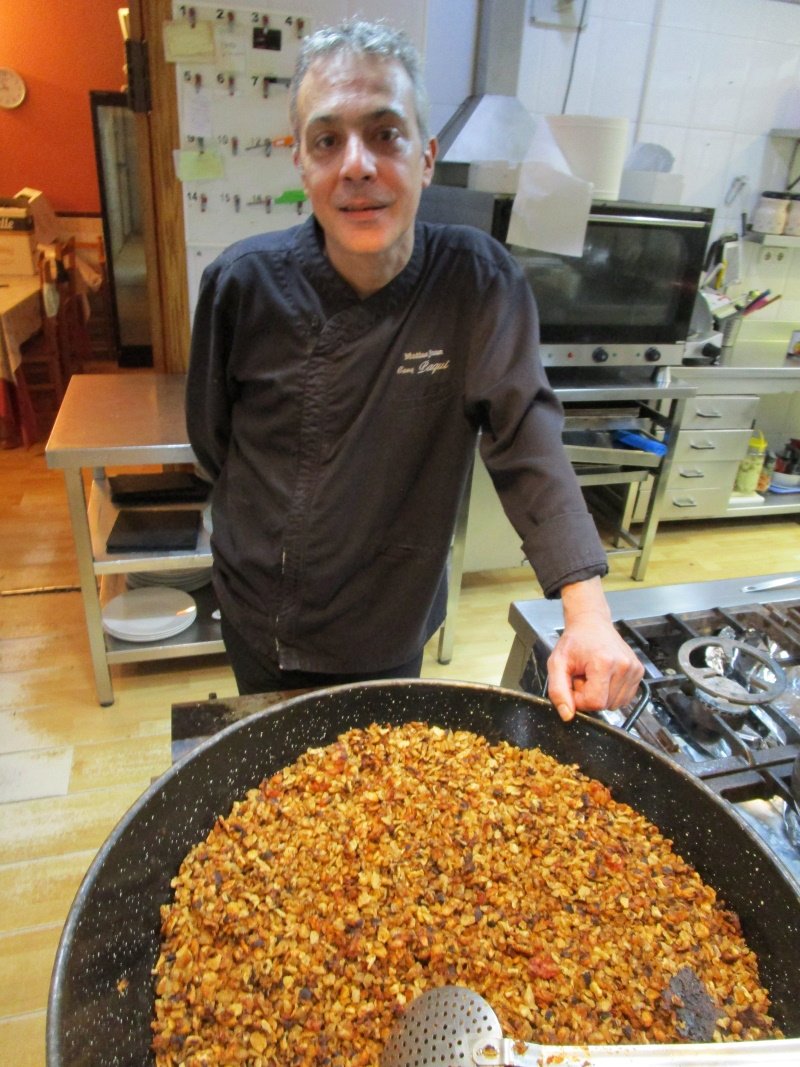 Saffroned Rice with Fish and Greens

Tucked away in the narrow streets of inland Castalla’s old town, Casa Paqui is an eminently family restaurant and, as such, its history since the 1990s says much of Spanish professional kitchens’ creative growth. When Paqui and her husband set up the business in 1994, she learned “by consuming books, experimenting in the kitchen and throwing away cooked food which didn’t come up to scratch.” Matías, in his forties, her son who now runs the kitchen, studied at Alicante city’s municipal cookery school, but, like many chefs of his age, values highly what he learned at home. “You begin to learn what’s really important in childhood, for example, how to cook lentils and cocido well.” While his wife runs the dining room his three teenage sons are prepariing to join the kitchen team: the eldest studies cookery in Italy and the youngest already helps in the dining room. Stretching the menu’s boundaries develops around working relationships with producers who nurture made-to-measure foods for Casa Paqui: everything from local tomato varieties, to organic celery for his signature dessert sorbet, and artesanal raw-milk goat’s milk cheeses matured to order. Alongside this Matías brings new techniques to local home-cooked dishes: he gives the torn unleavened bread in the town’s gazpacho game stews a patient dry sofrito lasting nearly a whole morning. Running a restaurant so far inland, he says, has good and bad sides. It may lack some urban creative stimuli and the crowds fuelling the number of clients, but that is compensated for by independence of mind in a rural setting as well as valued friendships with local chefs in the sierras. The menu will swing towards more avant-garde approaches when the next generation is cooking here, but, says Matías, he always reminds them, “never forgot where you come from as well as where you’re going.”